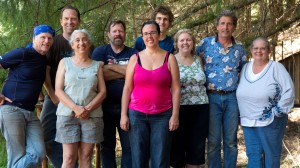 We all need time for renewal, time for thoughtful exchanges of ideas.  Joining Anthony Cody in Willits CA for his second Tomki Education Retreat was a glorious way to do just that.

Other than Anthony, the only member of the 9-person gathering that Tom and I had met before was Susan DuFresne, but we were all education activists with stories to tell, and current work to share.  Noel Hammatt came from Baton Rouge, with research that disputes the idea that schools are ‘failing’ at his fingertips (and a penchant for chopping up Anthony’s firewood!).  Mary Porter came from Boston, hopping mad over injustices she had watched unfold in her high school and in the world of (so-called) philanthropy.  Katie Lapham came from Brooklyn, where she works with English language learners at a public elementary school and was tasked to prepare materials for standardized testing.   Beyond teaching kindergarten in Seattle, Susan has been the moving force behind several education activist online sites.  She brought her husband Shawn, and 18 year old son Garrett.  Like Tom, they brought their perspectives from outside the profession.  Anthony had met each of us as a result of the blogs and websites he has developed, starting with Teachers Letters to Obama.  We collaborated with him in 2011 on short videos to advertise the SOS conference in DC.

What struck me most was the fire in the belly of all these people.  The source of that fire was almost always having seen children hurt by the direction education policy has taken—or not taken: students dropped from the roster and into the street without a diploma because their test scores could hurt the school’s reputation, a terrible home situation ignored because addressing the effects of poverty is not on the agenda, important values questions left out of the curriculum because they will not be on the tests, and weeks of class time lost to the mountains of paperwork most of us are unaware accompany the testing regimen.

Sadly, we all agreed that people purporting to make it better have thrown public education to the wolves.  The financial stake these “reformers” have in the directions they suggest is shrugged off as if it was inconsequential.  Yet what gives me reason to come away from 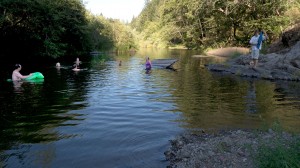 Tomki revitalized and optimistic (besides swimming in the water hole)  is that each person there was taking actions that could change the picture.   And each of them was involved in groups I had not heard about before I came, nor did they know of some of the efforts I was aware of!  The river of change grows bigger each day, and the tributaries are so numerous, one person will never know about all of them.

Perhaps you’d like to join one of our efforts?  Susan and Katie would love a letter from you at  Teachers Letters To Bill Gates  where currently they are using our series  as the jumping off spot.  Susan and Noel would be glad for your help creating “sticky” memes and generating videos for the Badass Teacher Association. Anthony and Diane Ravitch invite you to join efforts to elect more responsive representatives at The Network for Public Education.   Read Mary’s two part guest blog on Bill Gates printed in Anthony’s Edweek blog, Living in Dialogue where he has many fascinating articles.  Last but not least, let us know what you are doing.  Don’t assume a small effort is not worth reporting.  Together we will move this mountain!