Join us March 13 at 6:30 pm when filmmakers Tom and Amy Valens will be at Blue Oak School for a screening of August To June open to the whole community.  Many years before August To June was made, Blue Oak School’s founders were influenced by what they saw at the San Geronimo Open Classroom where Amy taught!  Blue Oak is located at 1436 Polk St, Napa, CA 94559.

Long before August to June, in the early 1980′s Tom Valens made a 45 minute documentary about the same school!  To Make A Difference has the same intimate style as August To June, but is more of an overview of Open Classroom education as practiced by the founders of the program.   See it here!  And then take a look at We All Know Why We Are Here, which follows New York’s Central Park East 1 Elementary School–the first small progressive public school founded by Deborah Meier at just about the same time here.

Kindergarten teacher Susan DuFresne and her husband Shawn are are taking their repurposed school bus cross country, giving away books and talking about the testing juggernaut, determined to instigate change one person at a time.  This is such a creative way to inform people about the harm standardized testing is doing–and encourage the joy of reading while they are at it. 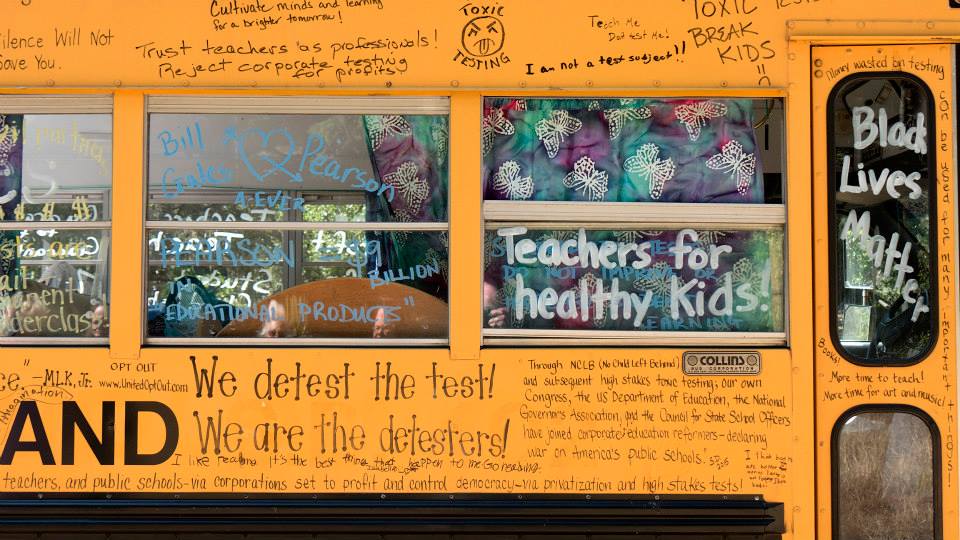 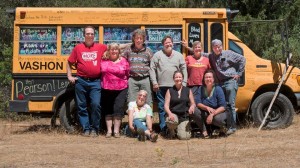 Last summer we had the good fortune to be on their route, and helped paint some slogans onto the bus.  It inspired teacher and education blogger Katie Lapham to create an opt out book cart that she plied on the streets of Brooklyn!

I drew my little curly haired kid representing the importance of play…which allowed me to be playful as well! 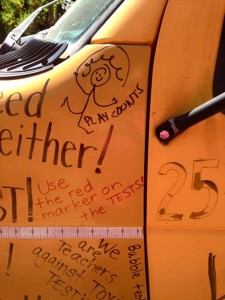 If you have some funds to share with the DuFresnes to help purchase books and gas, go to https://www.gofundme.com/272unp54 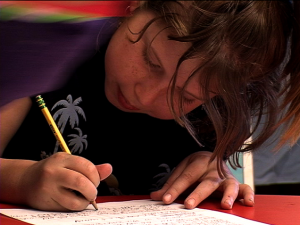 I got a letter from Diane Feinstein today about the latest version of ESEA.  sigh.  I include it at the bottom of this post.  Here is my response.  May it inspire you to write your own.
Dear Senator Feinstein,
All the provisions you sponsored are worthy, but your statement that “No Child Left Behind (NCLB) Act has provided educators and lawmakers with critical data demonstrating the strengths and weaknesses of America’s public education system.”  is disheartening.   The data was there long before NCLB, in the form of underfunded and understaffed low income urban and rural schools, and the de-facto segregation of our city school systems.  Poverty was and is the major defining difference in the educational opportunities for young Americans.  The demoralizing pounding of standardized tests gave us no new information.  If anything, it set back the small gains that had been in progress.   It did strengthen the hands of those looking for ways to increase their bottom line on the backs of teachers (non-unionized charters) and poor families (rearranged budgetary priorities: more for test prep, less for the arts, field trips, counseling…)
From what I have read so far, Congress has made some modest progress in addressing the catastrophe public education in America has endured since 2000.  There seems to be less focus on punishment in the legislation being sent to committee.  But by leaving such a large burden of testing in place they have not basically altered the misdirection that NCLB sent us in.  Your glee that the new law will “preserve annual state-designed assessments to ensure teachers and parents have reliable achievement data, and make increased investments in the expansion of high-quality charter schools.”  convinces me you have not taken off the rose colored glasses for-profit organizations have been passing out.
I expected more from you.
Sincerely,
Amy Valens
retired California elementary school teacher
film co-producer:  AUGUST TO JUNE, bringing Life to School
Good Morning Mission Hill: the freedom to teach, the freedom to learn

I am often asked about the children who we followed in August To June.  They were in third and fourth grade in 2005/6.  This past June those third graders graduated high school!  While I am still waiting to hear back from Alani and Lily, I know what all the rest are up to, and it seems like a good moment to report in.  it is easy to see that most of them have chosen to attend college.  That is the short way for me to describe them, but besides what you will see below, at least half of them have been active in programs to be of service to others or to protect our environment. They are off to a good start.

Amber Rose is attending University of Redlands Johnston Center for Integrative Studies after 2014/15 community service projects in Cambodia, Vietnam, Thailand, Ecuador and Peru.
Anna interned at the Marine Mammal Center during her senior year. She’s now at University of California, Davis.
Anne is attending Chatham University, majoring in biology and intending to go on to vet school.
Cameron is attending University of Georgia.
Elena is attending University of Vermont.
Elise was Drake High School’s Valedictorian. She’s attending University of Chicago.
Emily is at California Polytechnic State University.
Forest is at University of California Santa Cruz.
Isabelle spent last year at Feather River College, this year she is in Spain working as a nanny.
Ivan is at College of Marin.
Jasper is at Chapman College.
Kailash is creating his own path, with lots of traveling.
Kyla is at Oberlin College.
Laurel is doing work/study at Sivananda Yoga Retreat in the Bahamas as she pursues interests in yoga, homeopathy, and Ayurvedic and acupuncture healing.
Lauren (who we referred to as Kristin) works at the Bay Club Children’s Center.  She is saving up money to move to Santa Monica where she wants to take classes at Santa Monica Community College.
Makenna is at Hampshire College, after 2014/15 service projects in India, Ecuador, and Peru.
Marley is at Western Washington University majoring in math and intending to teach high school math.
Miles is at Santa Barbara City College.
Patrick is at College of Marin.
Rhianon is at Sacramento Community College.
River is traveling in Israel after attending Santa Rosa Junior College and working as the manager of The GreenGrocer.
Roshana is at Sarah Lawrence College.
Taylor is participating in a service program in Fiji, New Zealand, and Australia. He’ll start Western Washington University in the 2016 school year.
Zoe is at Grinnell College after community service last year in the Dominican Republic.

The film had the added benefit of allowing me to keep closer track of these young people, but I am in contact with many of the students who attended the Open Classroom, either because they are still in our community, or through the wonders of social media. With all the varied directions they have gone, the thread I find most striking is how many exhibit a strong degree of empathy, whether that is via the occupation or avocation they choose.   So often they are in the helping professions or involved in the arts, or are active in a community organization working for a better world.  They are caring parents, loving supportive friends.  I couldn’t ask for a better outcome.

Tell your two U.S. Senators to vote for Sen. Jon Tester’s amendment to reduce federally mandated standardized testing from every-kid-every-year to once each in elementary, middle and high schools.

The Senate will vote the week of July 7 on a new federal education law to replace “No Child Left Behind.” The bill ends federally mandated high stakes for schools and teachers. That’s big progress for assessment reformers! But the proposal maintains annual testing in grades 3-8. Sen. Tester’s amendment will end that counter-productive policy.

At Fairtest’s site you can easily just sign your name, or personalize the letter they will send to your Senators.

I just finished the recently published book, Loving Learning.  Written by Tom Little with important help from Katherine Ellison, it is a more than a guide to some of the places where progressive education is thriving today.  Taking each of the areas that Little sees as distinctive to progressive education, he traces their roots and looks at how they are expressed in today’s progressive schools.

It is fascinating to see how similar progressive practices are across the country, in public and independent schools, even though until recently communication between progressive educators has been very limited.  Oakland California’s Park Day School was Tom’s base for 37 years, so it figures highly in Loving Learning, but he spent the 2012/13 school year visiting 43 progressive schools.   While he distills what makes certain schools unique, and points out strong individual contributions to progressive practices with telling observations, we also recognize more and more clearly the common threads.

This excerpt about assessment (published in Salon) is particularly timely right now, with public school students enduring the annual high stakes testing that is the legacy of No Child Left Behind.  Students at many independent schools are involved in standardized testing as well.  Even without high stakes consequences the practice is questionable in a progressive context, as Tom is quick to point out.

Tom died shortly after he finished writing this book.  His legacy as the Park Day School head of school would have been great all on its own, but he moved beyond that one wonderful place.  He had a pivotal role in reinventing the Progressive Education Network.  With this book he will reach many who never had the chance to know this thoughtful, empathetic and dedicated teacher in person.

Less Testing More Learning! If we raise our voices together, we can persuade the Senate Education Committee to reduce testing requirements as it debates renewal of Elementary and Secondary Education Act/No Child Left Behind.

Please take a few minutes on April 8 to phone your U.S. senators in Washington, DC. Ask to speak to the staffer who works on education policy. If no one is available, leave your message with the person who answered the phone. Find the phone numbers here
Below is a model message. Feel free to use it, modify it, or say something entirely different.

Hello. I’m [your name], calling from [your town]. I’m calling to ask Senator [name] to support changes to No Child Left Behind that will promote a saner and less intrusive approach to public school testing. Specifically, I urge [him/her] to support a switch to testing once each in elementary, middle and high school, and to remove high-stakes consequences from federally required standardized tests. Both these measures will help address the current over-emphasis on testing at the expense of learning.

If you have specific stories about problems with over-testing, please relate them. Personal stories are the most effective.

Do you tweet? then join the April 8 Twitterstorm:as well!! Here is an example. If you modify it, be sure to include ‪#‎cutfederaltests‬ and the link to getting your Senators’ numbers:
“Join BATs, FT, SOS, TRRA, & UOO 4/8 ‪#‎CutFedTests‬. Call Senate http://thndr.it/1P6DfEf. Cut back tests, end high stakes.”

To tweet your Senators, find their Twitter handles here:
And if your speed is email, to send a letter to your Senator, go here

Now’s the time to contact your U.S. Senators and Representatives to reduce federally mandated testing! Our children deserve less testing and more learning.  Your voice can make a difference!  Go here to add your letter to congress.