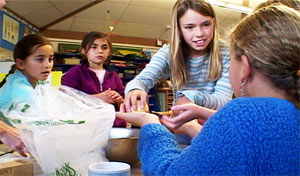 “Do not train children to learning by force and harshness, but direct them to it by what amuses their minds, so that you may be better able to discover with accuracy the peculiar bent of the genius of each.” ~ Plato

About The Open Classroom and The Lagunitas School District

How large is the public school district? – There are approximately 300 students k-8, about 90 of whom are in the Open Classroom. The district serves the four small towns of the San Geronimo Valley, in northern California.

Is this a magnet school or a charter? –No. This is one of two choices parents have for their elementary age children in our public school district.

What other choices do district parents have at this point? –Currently the two programs offered are both holistic: the Open Classroom, and a Montessori based program.  Both come together by 7th grade in the district’s middle school.

How do students do academically after your program?   While no scientific studies have been conducted, from the statistics kept by the local high school we can see that Open students do at least as well academically in high school as those from other feeder schools. Students report that they are well prepared for working independently and in groups. Many achieve honors and are seen as leaders. They have very high rates of high school graduation and college attendance, including attending some of the most competitive universities. Teachers tell us they can recognize Open students because of their willingness to ask questions and engage with adults. 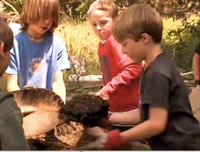 What is the district’s policy around NCLB requirements?   No Child Left Behind testing brought a strong negative reaction from parents in the Open Classroom and elsewhere. Since there were financial consequences, and not everyone in the district was against testing, valley-wide discussions ensued. Experts from many perspectives broadened understanding of standardized testing in general, and NCLB in particular. The result was school board support for the decisions of individual parents who do not want their children tested.

Why is there such a high percentage of girls in the class?    Just the way it happened that year. There have been years where boys outnumbered the girls. 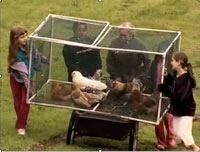 What is the socio-economic level of the community?   The school population includes families from many income levels, with the majority being middle income. The percentage of low-income families is high enough to qualify the district for Title One funding.

How did this school get started?   In the late 1960′s, the area was in a state of flux, as was much of the country. New residents interested in alternative lifestyles and political activism began raising families. They started cooperative pre-school groups, and attended school board meetings to dialogue about innovative educational ideas with board members. With enough board members receptive to the idea of a program where social, physical, emotional, and academic growth were seen as interrelated and of equal value, a trial classroom was started.

How long has the school been in existence?   In the fall of 1971 a multi-graded k-3 Open Classroom, was welcomed by some and opposed by others. A school board election in 1972 proved that the community supported alternatives in education, and the board decided to reconfigure the school with three elementary school programs. Parents were given a choice between the Open Classroom, a “3 R’s” program, and the existing self-contained classrooms. The Open program has spanned kindergarten to 6th grade, with four classes of 20-27 students each, for many years now. Parent participation is mandatory, but can be met in different ways. Teacher turnover has been small and staggered, allowing continuity and mentoring. While approaches and traditions have developed, the school is not static. Change is always afoot, spurred by the current population.

Could what you do here be done in an urban school with a higher population of at-risk students?    It is being done. See our list of schools in the Resources section, and notice that many are in urban areas.

Does a program such as this require more funding than a conventional classroom?   The financial requirements for teaching a whole child approach are not greater than those needed for a conventional classroom, although there may be different priorities for how the funds are spent. In our case parent participation is a key element to maintaining low adult-student ratios. This program receives the same proportion of the school’s funds as other programs. Not unlike many under-funded schools across the state and the nation, parents fund raise for additional support in all of the district’s programs.

For more about the other schools pictured at the end of the film, see Resources

More information about this Open Classroom

More about the Lagunitas School District